The seven most beautiful viewpoints of Meta

We tell you what are some of the most spectacular places in the department to enjoy at any time of the year.

The majesty of the plain can be seen from several points in the department of Meta. All this is possible thanks to the ecosystem composition of the territory, which makes this one of the most beautiful in all of Colombia.

Stone of Love, in Villavicencio

This is one of the most frequented viewpoints of the Buenavista village, located only about 10 kilometers from the Center, and from where it is possible to observe a spectacular panoramic view of the city and its imposing Guatiquía river.

The place is adorned by large rock sculptures with forms of macaws, owls, eagles, horses and other figures, among which is the mythical frog that is said to have the gift of fertility, so couples who They want to have children usually go to the place and put their hands on it.

This establishment also offers drinks and varied foods so that visitors can enjoy a pleasant time, but most importantly: as a family.

From this point, which can only be reached by navigating the Manacacías River, you can see how they merge with it, the Meta and Yucao rivers.

Among the activities that make this a magical place, is the sighting of toninas (the famous pink end), which usually increases its presence there.

The sector where this viewpoint is located also has a high historical content, as it is where the maximum commander of the guerrillas of the plain, Guadalupe Salcedo, delivered his rifle and initiated a reconciling stage.

In a creative way, the Sanmartineros turned the old metallic tank of the aqueduct of their municipality, into a tourist viewpoint of about 35 meters high.

From the highest point of the structure the visitor is given a 360 degree panoramic view.

In the same square where the viewpoint is located, there are establishments dedicated to the sale of local products and handicrafts inspired by the traditional San Martín Gangs, declared Cultural Patrimony of the Nation.

In the Alto de Chichimene, in the municipality of Acacías, there is the Mirador Mangos Park, from there it is possible to observe an extensive area of ​​African palm crops, infinite nature.

This is a magnificent place to spend an experience of tranquility. It offers swimming pool service, food and romantic outdoor spaces, ideal to enjoy as a couple.

To get from Villavicencio you must take the road to Acacías until the crossing to San Carlos de Guara and turn left. The viewpoint is about 8 kilometers from that point.

It is located in the Alto Acaciítas de Acacías - Meta village, and allows you to see a large part of the municipality.

This is a recreational center that cyclists love, who have it as an obligatory whereabouts after their activity and when they think they deserve a good drink.

The place offers ample space for camping and even making campfires. It also has restaurant service, lodging in cabins and wells of crystalline water, coming from the mountain.

This is located 102 kilometers from the capital of Meta, on the road to Vista Hermosa, on the so-called route of the Embrujo Llanero.

From there it is possible to observe the Cordillera Oriental, some sectors of Granada, San Martín and Fuentedeoro. In addition the view that offers sunrises and sunsets, are unmatched.

Near the viewpoint there are establishments to eat and drink. 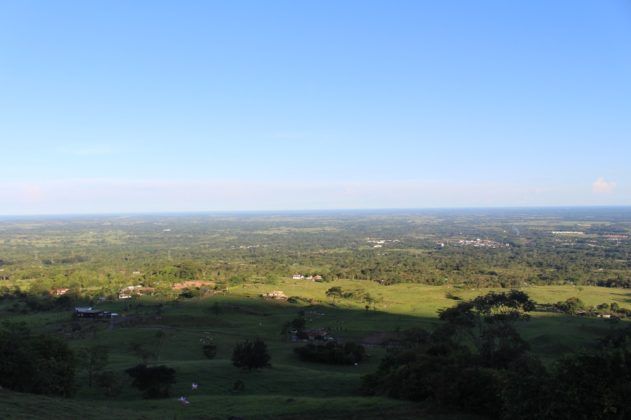 The place is located 4 kilometers from the town center of Restrepo, by the road that leads to the Caney Alto village.

It offers a restaurant service specializing in Colombian food and with particular emphasis on that inspired by the Eastern Plains.

Natural bathing places, such as gorges and waterfalls, can be found near the viewpoint.